CPW Locksmiths – Who is Most Likely to be a Victim of Property Crime?

Get Proper Locks! CPW LOCKSMITHS about UK and Ipswich data…..

According to the year ending March 2015 CSEW younger people were more likely to be victims across most property crime types; the exceptions were plastic card fraud and criminal damage where victimisation tended to be higher in the middle of the age distribution. Men and women showed similar levels of victimisation in most crime types, with the exception of robbery, where men (0.3%) were twice as likely to be victims compared with women (0.1%).

For other characteristics, such as employment status, occupation, household income, the likelihood of victimisation shows more variation across the different crime types. Some of the main findings show:
across almost all offence types the unemployed appeared more likely to be victims compared with those in employment or who were economically inactive (the exceptions were plastic card fraud and criminal damage), although the differences were not statistically significant
those in employment (5.1%) were more likely to be a victim of plastic card fraud compared with those who were unemployed (4.3%) or economically inactive (3.8%); plastic card fraud victimisation was greater in higher-income households (for example 6.4% of households with a total income of £50,000 or more compared with 3.4% of households with an income of less than £10,000)
students were more likely to be victims than those in other groups for a number of crime types, including domestic burglary, bicycle theft and theft from the person.

The statistical bulletin ‘Focus on: Property Crime, 2014/15’ provides a comprehensive overview of statistics on property crime.

Items stolen in domestic burglary in a dwelling (2014/15 CSEW) 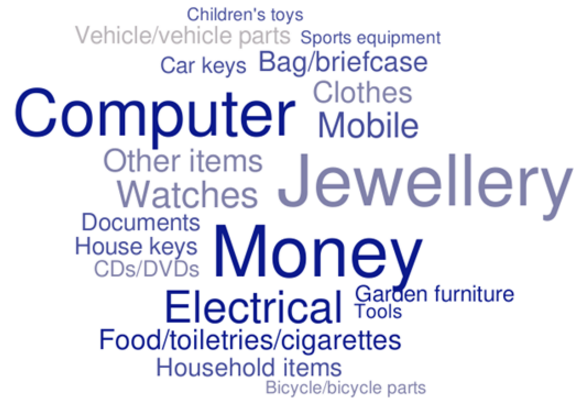 According to UK crime stats more than 32 thousand cases of burglaries are reported every month in England and Wales! Which means that more than 400 thousand families are robbed every year!

But how about our local Ipswich and Felixstowe area?
The diagram below describes the crime statistics for last year for the Central  Ipswich area: 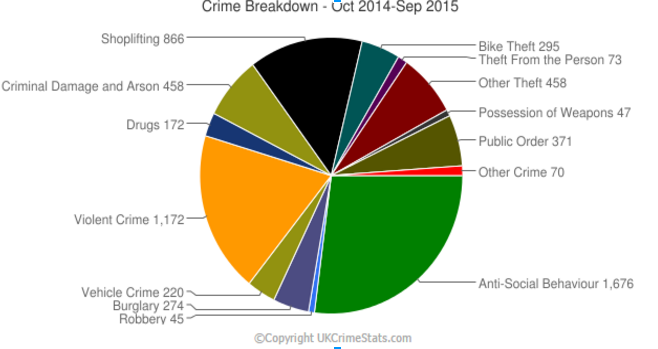 As you can see from the diagrams, there were nearly 300 household-related crimes in the Central Ipswich area, more than 200 vehicle crimes and more than 450 crimes labelled as ‘other theft’.

So how can you help prevent your house from being robbed?

When was the last time you changed your door locks? Have you considered more advanced locks such as Access Control Systems? Are you sure that your locks meet insurance standards? Consult that with your local locksmith in Felixstowe, Ipswich, and surrounding area in East Anglia.

CPW Lockmiths have been providing security solutions to both domestic and commercial properties in Ipswich and Felixstowe for over 40 years! From our Workshop and showroom in Ipswich we repair and provide a large range of both domestic and commercial locks, including leading manufacturers such as Chubb, Yale, Union, and Mul-t lock. We are fully DBS (previously CRB) checked as well as being a Trusted Trader.

If you live locally to Ipswich and Felixstowe we would be happy to come and carry out a free evaluation to bring your home or business security up to insurance standard.

IMPORTANT:
We are offering 10% discount off our materials only until the 23rd of December 2015!